Sealy International (“the Company”) is committed to limiting the risk of modern slavery occurring within its own business, infiltrating its supply chains or through any other business relationship.

The policy applies to all persons working for or on behalf of the Company, in any capacity, including employees, directors, officers, agency workers, contractors, consultants and any other third-party representative.

Sealy International expects all who have, or seek to have, a business relationship with the Company to familiarise themselves with this policy and to act in a way that is consistent with its values.

This policy will be used to underpin and inform any statement on slavery and human trafficking that the Company is required to produce by law.

Modern slavery can take many forms; it is a complex and multi-faceted problem including, but not limited to:

All forms of modern slavery have in common, the deprivation of a person’s liberty by another in order to exploit them for commercial or personal gain and amount to a violation of an individual’s fundamental human rights.

Tackling modern slavery requires colleagues to play a part and remain vigilant to the risk in all aspects of Sealy International’s business.

The breach of this policy by an employee, contractor, supplier or director of the Company may lead to disciplinary action being taken. Serious breaches by employees may be regarded as gross misconduct and can lead to immediate dismissal.

All colleagues will be expected to co-operate to the fullest extent possible in any investigation into suspected breaches of this policy or any related processes or procedures.

If any part of this policy is unclear, clarification should be sought from Sealy International’s General Counsel.

This Anti-Slavery Policy will be reviewed on a regular basis and updated to reflect legal and operational requirements. 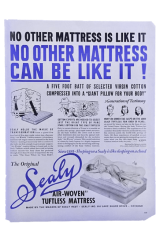